As a junior hunter-jumper rider in the 1970s, I revered the Steinkraus Hermès saddle. It was originally custom-made for Bill Steinkraus, captain of the U.S. Equestrian team, designed on a racing saddle tree and flat without knee rolls, blocks or suede. Mr. Steinkraus wanted the closest possible contact with his horse. Dave Kelley, Frank Chapot, Rodney Jenkins, Michael Plumb, Joe Fargis—the icons of the “A” shows in the 60s, 70s, and 80s all rode in Hermès Steinkraus saddles. Back then, the $300 price tag was steep for any but the pros or wealthy amateurs. Fortunately, the Crosby saddlery in England made a more affordable version called the Prix des Nations. It shares the same light weight, pigskin seat, lack of knee rolls, and close contact of the Hermès. I have two Prix des Nations that are now 45 years old and they are the only saddles I’ll ride in. 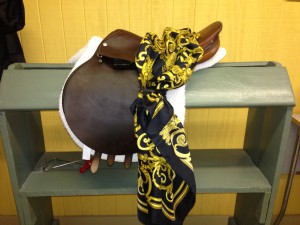 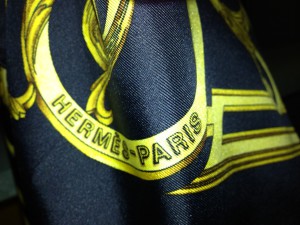 I didn’t give much thought to Hermès after my junior years. Until one day in a consignment shop in San Jose, I came across a navy and yellow scarf labeled Hermès. It was beautiful. I also thought it was probably a fake. But the silk twill was heavy, it was in pristine condition, and crazy cheap. So I bought it. I came across an online catalog of Hermès scarves just last week—over 20 years later—and was fascinated by the history, designs, different artists, and especially the equestrian scarves for which Hermès is famous. And there I found my scarf—Les Tuileries. Following published guidelines for differentiating an authentic scarf from a fake, it was immediately clear that I have a real one. So, my Hermès had arrived in silk, instead of leather. And that’s fine with me. Of course, there is now a gorgeous Hermès handbag I saw that is to die for, the saddles are still perfection, and my Hermès scarf wish list keeps growing. Ha!

I had junk. A pile of ugly concrete plugs that used to anchor fence posts in the ground. They came with the ranch, and I was sick of looking at them so I called 1-800-GOTJUNK to haul them away. They did. And I forgot about it. But this week I got an email blast from 1-800-GOT-JUNK that I opened and read because it was called “The Ten Weirdest Pieces of Junk We’ve Seen.” Was it the five moose heads (really, five?)? Six-foot tall, hot-pink working Walkie Talkies? Or the mechanical bull (I bet I could find a place for it)? Anyway, it was funny and part of a recently revamped direct mail campaign that takes junk—but not itself—seriously. I love it when a company is so… themselves.